In typical Lexus style, we started our test drive at the local Four Seasons and then motored along a very scenic route up to the infamous Monticello Racetrack, a member’s only car club that allows everyday folks to test their mettle at top speeds. We started off in teams of two zipping around the twisting Monticello track at speeds over 100 mph, all while paying close attention to the look, feel and most important the drive-ability of the Lexus RC.

For the unfamiliar, the RC is considered a luxury sport coupe vehicle. While most coupes are two-door versions of four-door cars, the RC follows a different path. There isn’t a larger version of the Lexus RC. It was designed as a two-door car from start to finish. The result is what feels like a more focused coupe. Sure, there are backseats but we wouldn’t suggest anyone riding back there for long periods of time.

The RC is low to the ground, which means it might be slightly more suited to drivers who are young and energetic, but it does have four different drive mode options ranging from ECO to the dynamic Sport S+ option (F-Sport only), to suit a wide range of driving tastes– and it’s fast enough to making even zipping to the grocery store fun.

Here are six lifestyle impressions from our first drive.

1. G-Force, Activate!
Honestly, who cares how it works? Having a dashboard gauge that measures your G-force as you whip around the city is way cool. Out on the racetrack, the gauge would create large pools of orange light to show how gravity and the force of acceleration were pulling the car in different directions, especially while banking into tight turns. It’s a gadget Speed Racer would love.

2. This Little Light of Mine.
One of the colors the RC is offered in is called “molten pearl” and it is totally worth a look. Not that the RC doesn’t look good in any color but the molten pearl paint makes the car looks like it just emerged from an erupting volcano. It’s an eye catcher. You’d be doing yourself a disservice if you didn’t at least check it out.

3. Spin Move.
In the end, cars are all about movement and we pushed the RC hard on both the street and the racetrack. It’s both nimble and responsive, especially the version with four-wheel steering, which makes the car feel welded to the road. And, this may seem obvious but the Lexus is fast without feeling like it. 80 mph in this car feels like 40 mph. We didn’t even realize we were speeding until the police pulled us over. Whoops.

4. Leather & Lace.
Well, not quite lace but the interior color and texture combos for the RC are insane. Lexus is already known as a company that creates sexy cars so their efforts to up the ante in this regard end up being delightful for customers. The RC comes with all of Lexus’ trademark sex appeal, like contrast stitching, sumptuous materials and interesting colors like “Circuit Red” and “Stratus Gray.” In the F-Sport, touches of aluminum and black carbon fiber add even more swagger.

5. Sunset Grill.
If you know anything about Lexus, you already know that it’s all about the iconic front “spindle grill.” Their spindle-shaped grill is a trademark and, on the RC, it seems particularly dominant. In fact, in the F-Sport model, you can actually see the letter “F” within the metal mesh. Aside from the grill, the RC has lots of functional venting which help with engine cooling, aerodynamics and also serves to make the car look, well, cooler. When examined from a slight distance this four-seat coupe looks more like a two-seat muscle car of days past.

6. On the Flipside.
On the negative side, the low entry height was a bit of a pain, since we were getting in and out of the RC often but, that said, once we were inside the car, it felt comfy and racetrack worthy.

There wasn’t a whole lot not to like about the RC but we would like to see some height adjustments, auditory blind spot notification and, of course, some T-shirts in “molten pearl” to match the car. Natch. 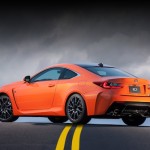