Shira says: Yesterday, we were lucky and enjoyed some unseasonably fantastic winds throughout the day in Austin. Even so it was still hotter than heck and we were running the air conditioning like our lives depended on it. It wasn’t until the second day that I realized the little “A/C” button on the key fob is a fantastic feature that allows you to turn the car’s air conditioning before you get into the Prius. I can’t wait to try it today! 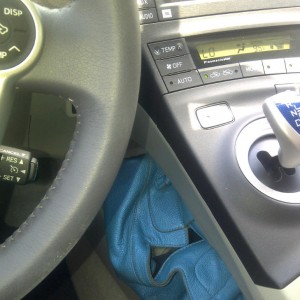 Considering how much air conditioning we blew yesterday, I am impressed with how much fuel we still have in the tank. I am also still a huge fan of the secret area for purses, keys and phones beneath the gear shift console. It’s just such a nice way to keep things tidy! (left)

With another day behind the wheel under my belt, I do feel better about the “park” button. I’ve adjusted! I do think it’s safe to say, however, that when driving the Prius and parking anywhere– incline or not– it’s best to use the parking brake too.

I am really enjoying the interior spaciousness of the car, especially for a smaller vehicle. Not to toot my own horn, but I am impressed with how well I am parking in tight spaces– in one try, no less! I credit the size of this car and the little blind spot windows at the front right and left sides of the car which are very cool (below). I know other cars have them, but I’d never experienced them and they are a great little extra help.

I’m finally getting how to lock the door! You just have to let the OCD side of you relax and trust that one click of the button on the key fob means it’s locked. This is an exercise in trust! It’s also a foolproof way not to lock your keys in the car. Also, I just found out no one can steal your car by just pressing the car’s “start” button UNLESS the key fob is inside the car. So, don’t leave the key fob in the car! Beside, if you do, the car will be unlocked anyway. I refuse to adjust to this Texan way of life in leaving everything unlocked!

Yesterday we stayed pretty local in Austin, driving around to the South Congress and Warehouse District. Austin is

very much a Drive-My-Own-Car city, but they really have some fantastic initiatives to for bicycle riders, too. We took an awesome, shaded bike tour with Barton Springs Bike Tour company. There are two tours and I took the “Peace, Love and Zilker” tour to avoid any car traffic (although the city is really fantastic about cars and bikes coexisting on the road). With Barton Springs, we cruised around the famed Ladybird Lake, passing by Auditorium Shores, the Stevie Ray Vaughn Statue, The Old Railroad Bridge, Zilker Park, and the delicious looking Barton Springs Pool. (Today’s plan is to swim!)

Our bike tour ended just as Austin hit it’s hottest stretch of the day — 2pm-5pm — so we got back into our air conditioned chariot and tooled around South Congress Street, checking out all the vintage food trucks and cute boutiques. In Austin, parking is really easy, for the most part. There is some on-street parking and lots of garages seem to average $5. For a New Yorker, that is cheap and well worth it!

The GPS is always a huge treasure in a new place, but there are some annoyances with it. While I love how it tells you super detailed information about construction, accidents and delays up to the minute, I am not a fan of how the GPS doesn’t just start you from where you actually are. It always says to “go to the highlighted route.” My thing is, ‘Look if I need the GPS to get me somewhere, I probably don’t even know where the highlighted route starts.’ 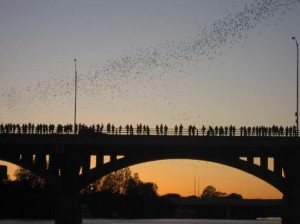 The Prius could also be better with it’s lighting. At night, it doesn’t seem to have an alert to remind you to turn your lights on or off– that would be helpful.

Speaking of night, another cool Texas thing to do is cruise around on Lady Bird Lake. We took a sunset cruise withCapital Cruises to check out the world’s largest bat colony. It was incredible to watch roughly a million Mexican free-tail bats take off from beneath a bridge in formation to do their thing. We saw lots of kayakers, water bicyclists and stand-up paddlers (!) in the water checking out the bats. Today’s mission is to drive to the lake to do some stand-up paddling ourselves!

At Home on the Range