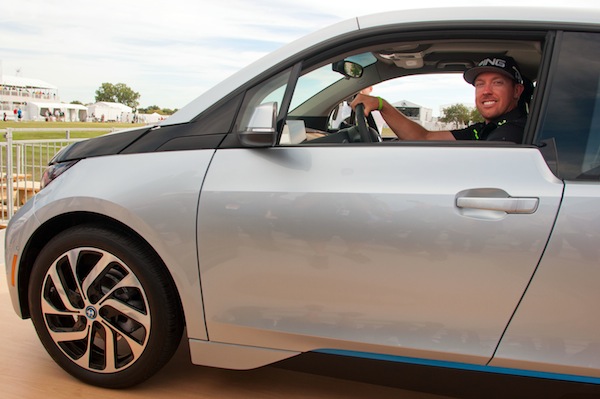 Audiences erupted into applause when the 31-year-old golfer made the stunning play, ultimately pushing him into first place to make him the winner of both the tournament and the proud owner of the recently revealed BMW i3, which isn’t even available to the public yet. Mahan’s overall performance will go down in history because his ace put him one stroke under former world number one golfer Rory McIlroy (NIR).

Prior to the start of the third playoff tournament on the PGA TOUR, Rory, the winner of the last year’s BMW Championship had taken the opportunity to test drive the BMW i3 and was impressed by the speed and handling of Mahan’s new ride. Will Mahan take him for a ride in his new BMW i3?

“I’ll have to think hard about that. After all, it is a really cool car and I am one of the first to get my hands on it. Rory will have to ask very nicely,” Mahan joked. “But seriously: I am very impressed by the BMW i3. It looks awesome and it is great to know that it is completely zero-emission. So far I have only been able to sit in the car briefly, but I am really looking forward to driving the BMW i3.”

Also, the first player to hit an ace on the eleventh hole was awarded with a breath-taking BMW M6 Gran Coupé. And that’s not all! One lucky caddie received a $100,000 scholarship from The Evans Scholars Foundation and BMW. Everybody wins.

VIDEO: Harley-Davidson gets tricked out

Lexus Teams with Toys For Tots