Skip to Content
Home / Automotive / He Says She Says / He Says, She Says: 2013 Hyundai Sonata Hybrid

HE SAYS:
I rarely do test drives in NYC. Between the alternate side parking, expensive garages, and endless traffic congestion, it’s not a very user friendly place for driving. That said, I was surprised when I learned that the location of our 2013 Hyundai Sonata test drive was not only in the Big Apple, but right in the heart of Harlem at Dinosaur BBQ. Dinosaur, as it happens, is one of my favorite places to dine when I’m “uptown.” The mac and cheese is one of the city’s best and I hear the BBQ ribs are slap-somebody good. All of this was certainly incentive enough to start and end our test drive adventure there. After a quick walk-around, Holly and I hopped into a sky blue Hyundai Sonata Hybrid and hit the road. Dinosaur is conveniently located right along the West Side Highway so it was easy to jump out of the city and head north. Even though I’ve test driven plenty of hybrids of late, I somehow always expect them to have the same sluggish lack of power that they used to have back in the day. The Sonata, of course, was not the least bit sluggish. In fact, the only thing that reminded me I was in a non-gas-guzzling ride, was a cute green leaf animation that seemed to sprout on the dashboard as soon as I started the car. Like most hybrids the Sonata offers a number of on-screen visual options to help you find your optimal performance level between gas power and electric. As an aside, it’s great to have something so interactive to focus on during long, monotonous drives. Of course, our drive was anything but boring. By zigging past the George Washington Bridge, we entered an area of the city I’ve never even seen before. My mother will be happy to know that I’ve finally seen the Cloisters– at least in passing. By the time we got up to Sleepy Hollow, I felt like I was maximizing the car’s hybrid potential. Naturally, the mid-size luxury market is a very competitive space and it’ll take more than fuel economy and fancy gauges to set the Sonata apart. Good thing the new Sonata is pretty too. With gleaming, star-ship worthy instrumentation, sleek lines, an eye grabbing hood ornament presentation and a double-long moon roof that invites the sun right into the car, the Sonata seems to be just the right vehicle for the 50-something buyers who like it most– whether they are dashing to Dinosaur for BBQ or escaping the headless horseman in Sleepy Hollow. –SékouWrites

SHE SAYS:
When we took off on NYC’s West Side Highway in a 2013 Hyundai Sonata Hybrid, Sékou’s first words were, “This is very zippy for a hybrid.” Having recently driven the Ford Fusion Energi, a plug-in hybrid (that was also very zippy) I countered with, “Hybrids aren’t golf carts anymore!” Hey, it’s wonderful and true. We have both been in the business long enough to remember the first attempts at the meeting of batteries and motors. In those days, you could tell if a car was a hybrid by the badging and the over-complicated dash design. The new hybrids are almost transparent … except for the discreet eco mode signage and small insignias on the sleek bodies. In fact, Hyundai’s 2013 Sonata Hybrid’s lean design creates a drag coefficient of an exceptionally low 0.24 that compares favorably to the Porsche 911 GT2 RS (0.34) and the Nissan GT-R (0.27). That’s bragging rights! All that contributes to a MPG of 36 in the city and 40 on the highway. And the upshot is that Hyundai is capturing a new buyer with their hybrid Sonata. Case in point: The OEM’s research shows that the predominately male buyer of the Sonata is 53% male, versus 62% for the Sonata Hybrid; the average age is 55 for Sonata and 56 for Sonata Hybrid; 48% college grads go for the Sonata and 62% for Sonata Hybrid and the median household income is $77.9K for Sonata and $95.4K for Sonata Hybrid. Conclusion—there are more buyers for the hybrid and they are older, smarter and wealthier. Welcome to the age of eco! But, perhaps, one of my biggest questions has always been, “What about the battery?” Hyundai answers that with a lifetime replacement guarantee, whereas the Camry and the Ford Fusion hybrids carry an 8 year -100K replacement contract. Bottom line? A lovely looking vehicle both inside and outside, smooth, quick handling. Lots of interior room with useable cubby spaces, easy to read controls and a navigation system that truly worked like a charm. And last but not least, a price point that speaks my language. -Holly Reich

STATS:
Hyundai Sonata Hybrid starts at $25,650.
Sonata Hybrid Limited Starts at $30,550.  Standard equipment: 17-inch Eco-spoke alloy wheels, leather seating surfaces, steering wheel and shift knob, heated rear seats, power drivers seat with lumbar support, navigation system with high-resolution touch-screen display, rear backup camera, Infinity 400 watt sound system and Siriux XM. Add the expansive double-paned panoramic roof and the price point jumps to $31,550.
Fave feature: Storage space. It may seem like a small thing but having a few extra nooks to store your various widgets can come in handy and the Sonata has plenty, from a mini cubby on the left side of the steering wheel to sunglasses holder in front of the rear-view mirror. 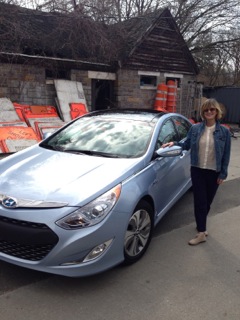 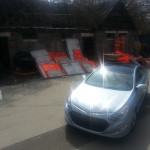 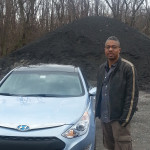 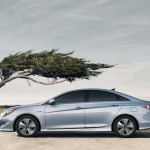 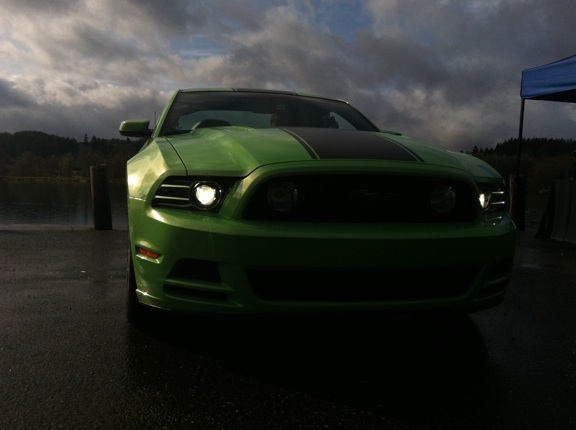