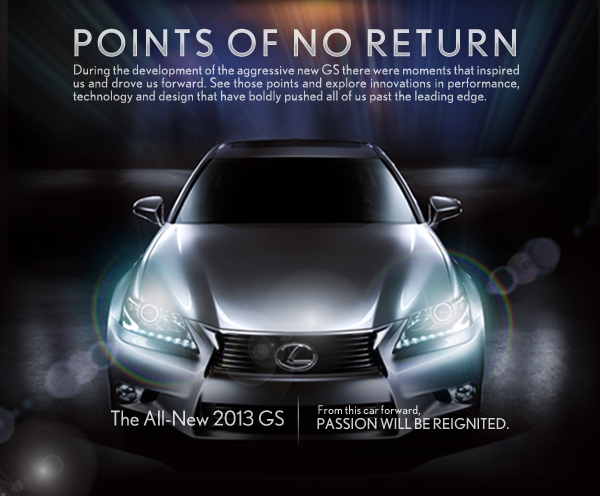 For our Lexus lovers out there, you’ll be happy to hear this news!

In anticipation of Facebook’s launch of Timeline for brands, Lexus unveiled a new Timeline-inspired Facebook app that allows Lexus to connect with its fans on a more personal level.

The Points of No Return application focuses on the all-new 2013 Lexus GS (arriving in showrooms this month), highlighting milestones in the creation and history of the model, as well as other groundbreaking moments in social media, technology and design.

Through its Timeline-inspired app, Lexus is sharing the passion of its dedicated fans with a wider audience while making it easier for enthusiasts worldwide to engage with the brand. The app takes advantage of Facebook’s recently unveiled custom Open Graph and uses verbs such as “Want,” “Own,” and “Remember,” in the context of historic moments in technology history, previous GS models and the all-new 2013 GS. Each interaction will be shared as a story on the user’s personal Facebook Timeline, similar to a status update.

This launch makes Lexus the first brand to unveil a Timeline-inspired application and an early developer to incorporate Facebook’s new Gestures platform.

“We developed this application to empower Lexus fans to engage with the brand in a new way, leveraging Open Graph features to enhance user experience,” said Brian Smith, Lexus vice president of marketing. “We’re not waiting for the future. It’s all about innovating, including a ‘sneak peek’ of exciting things to come on Lexus’ Facebook page.”

As part of the larger 2013 GS launch ad campaign, the Points of No Return application creates a veritable museum of Lexus GS history intertwined with important moments of global change. Memorable events featured on the app include the launch of the LF-Gh (the Lexus concept vehicle that inspired the new GS) and the world reveal of the 2013 GS at Pebble Beach Concours d’Elegance.