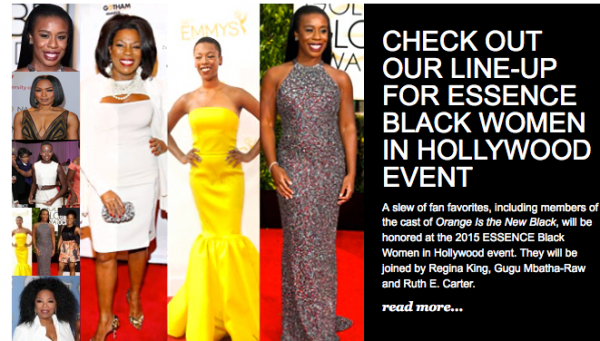 The ESSENCE Black Women in Hollywood Luncheon is presented by Lincoln.

The Black Women in Hollywood luncheon will take place at the Beverly Wilshire Hotel on February 19, 2015, to recognize the extraordinary achievements of trailblazing women in film and television.

“The past year has been a game-changer for women in Hollywood.  We are creating, performing and calling the shots,” said De Luca. “By recognizing our leading ladies both in front of and behind the camera, ESSENCE Black Women in Hollywood illuminates the ‘Power of our Presence.'”

“ESSENCE embodies the diversity of our stories, and Black Women in Hollywood allows us to honor fresh and innovative storytelling, as well as groundbreaking portrayals,” added ESSENCE President Michelle Ebanks.  “This year we are proudly honoring seven brilliant actresses from the original hit series Orange is the New Black; a critically-acclaimed actress Gugu Mbatha-Raw; an accomplished performer and director with a career spanning three decades Regina King; and an inspirational creative talent Ruth E. Carter.”

2015 marks the 45th anniversary of ESSENCE magazine.  Since its inception in 1970, ESSENCE has been dedicated to the progress, uplifting and celebration of African-American women in all fields including film and entertainment.  Black Women in Hollywood commemorates the brand’s annual Hollywood issue (March), which will be available on newsstands on February 13th.  ESSENCE.com is giving fans exclusive access to the style and substance of Black Women in Hollywood by live streaming all the red-carpet action, including interviews with the stars, starting at 11:00 a.m. PST/2:00 p.m. EST and re-airing that evening at 6 p.m. PST/9 p.m. EST.