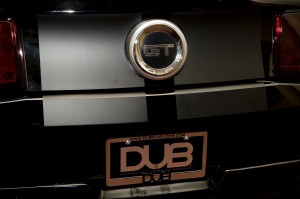 Not too long ago, rappers were competing over who could brand the next energy drink. These days, a few of the bigger players in the rap game have applied their marketing muscle to an item with a heftier price tag: cars. Rap superstar (and car buff) Nelly visited Detroit’s Auto Show this month to stump for the 2011 re-launch of Ford’s Mustang 5.0 GT— the iconic speed machine that Ford discontinued in the early 90s.

“I don’t care where you grew up, everyone knows the Mustang,” Nelly says of his long-sought-after trophy car. And now that Nelly is at the pinnacle of his career– he was recently ranked third on Billboard Magazine’s “Artist of the Decade List”– he not only gets to have the Mustang 5.0 that he always wanted as a kid, but he gets his very own customized version via DUB Magazine, the wildly popular car customization publication. The design teams at DUB and Ford worked directly with Nelly to create the car of his dreams: a black on black Mustang 5.0 with a suede and leather interior, plus body styling that makes it look faster than a speeding bullet.

Judging by the “oohs” and “ahs” of the many folks who crowded around Nelly and his car in Detroit, it was clear that he’d crafted a winning combination of style and speed. The coup de grace? His version is one of a kind.

When They Reminisce Over You …