If you work in New York’s World Financial Center, you might see something interesting as you walk to work this week.  Well, lots of somethings, actually.

Throughout the week, you’ll be surprised to find full sized cars positioned around and within the beautiful lobby of the World Financial Center.  Parked in plain view, looking as if they are as much a part of the opulent ambiance as the boutique stores and elegant restaurants that inhabit the first two floors of the building, you’ll find every kind of new car imaginable.  From the affordable, like the wickedly fun and gas-friendly MINI Cooper ($19,000), to the expensive, like the ultra-luxurious and insanely fast Bugatti Veyron ($1.3 million).

“I think this is the most fantastic thing you can do,” says Motorexpo’s CEO Graeme Carver, as we sit amidst Jaguars and Cadillacs on the first floor of the building’s lofty atrium.  He is referring to the opportunity for consumers to experience such a wide variety of cars in one location.  Frankly, I’m inclined to agree.

Motorexpo, now in its third year at the World Financial Center, is a high-quality auto show that’s smaller, less crowded, and completely free.  Yes, free.  The cars are arranged around the public spaces of the building, from the second floor (they were hoisted up by crane) to the small inner harbor just behind the building, where anyone and everyone can see them, touch them, and even test-drive them.  Browsers can also ask questions of the 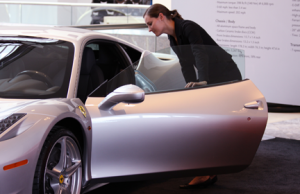 automotive product specialists in a no-pressure environment.  And, if you happen to decide you want to buy instead of look, they’ll promptly put you in touch with the people to make that happen.

This is particularly convenient for the many captains of industry who work in the World Financial Center.  CEOs of companies like Merrill Lynch and American Express can easily stop by to examine or even buy a car on their lunch break.  Last year, a local Land Rover dealership that placed their cars at Motorexpo sold eight vehicles.  Remarkable, especially in today’s economy.

Speaking of sales, Carver tells a great story about his very first Motorexpo, held in the UK in 1996, where a gentleman walked up to him wth two credit cards in hand.  The guy was on his way to buy a cup of coffee, saw a new Porsche that Carver had on display and wanted to buy that too before he headed back to work.

This man, like many who frequent Motorexpo, are often in the market for a new car but don’t have the time to go car shopping.  The brilliance of Motorexpo is that it brings the cars to these busy people and, of course, to you.  “For just the cost of a subway ticket,” Carver adds with a smile. 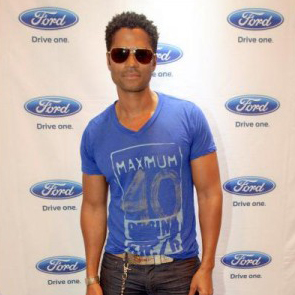